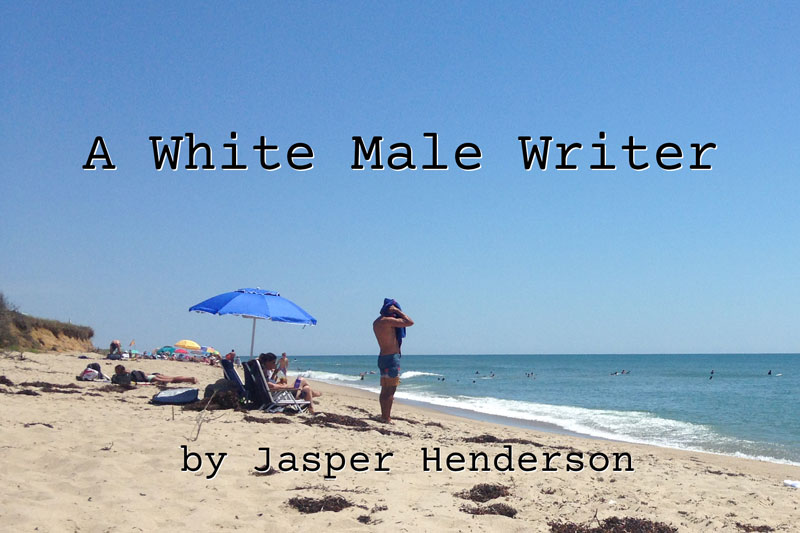 .
The literary journal Your Impossible Voice has just published my story, “A White Male Writer,” which I hope that you’ll read either on its website or in the print edition. Here are its opening lines:

.
He was a white male writer, and—despite having kissed a few boys at a Halloween party last year, even letting one stroke his bare chest, despite the occasional fantasy in which other boys featured — he knew he was for all practical and self-image purposes straight. So there it was: he was a man with light complexion and heterosexual leanings who wrote fiction, and he often expressed this in the cultural language of his day. Straight / White / Male he wrote in the margin of his notebook during class. Then he added, Unwanted.

Of course he wasn’t really unwanted. If he wrote something genuinely good, beautiful, and interesting, others would read and enjoy it, and he would eventually find a way of getting it published. Likely his path to print would even be easier than most. But his writing wasn’t genuinely good, beautiful, or interesting. He wrote a winking parable about a vendor at a gun show, a venomous parody about two lovers at the Student Center’s Tuesday Karaoke Night. He wrote a thinly veiled piece of autofiction about an unpleasable boy who had sex with the same girl as he had last year, in the same bed covered in stuffed animals. They were bad stories; unequivocally they were bad. Some of his professors thought they saw here and there the germ of good writing, perhaps in his ear for the names of fictitious groups like “Sudsy Studs Carwash,” “The Union of Back-Up Singers for The Tone-Deaf,” and “Melancholy Celibates Anonymous.” It’s more likely, however, that they were searching for something nice to say, some morsel of praise to cantilever their very constructive criticism. He noticed that his creative writing teachers, resolute in their practice of crossing out every last intensifier on his drafts, nonetheless used them in great quantity when prevaricating about what they liked in his stories. “It’s a very, very believable scene.” “I’m extremely impressed by the name of this group, really.” (Click here to keep reading)